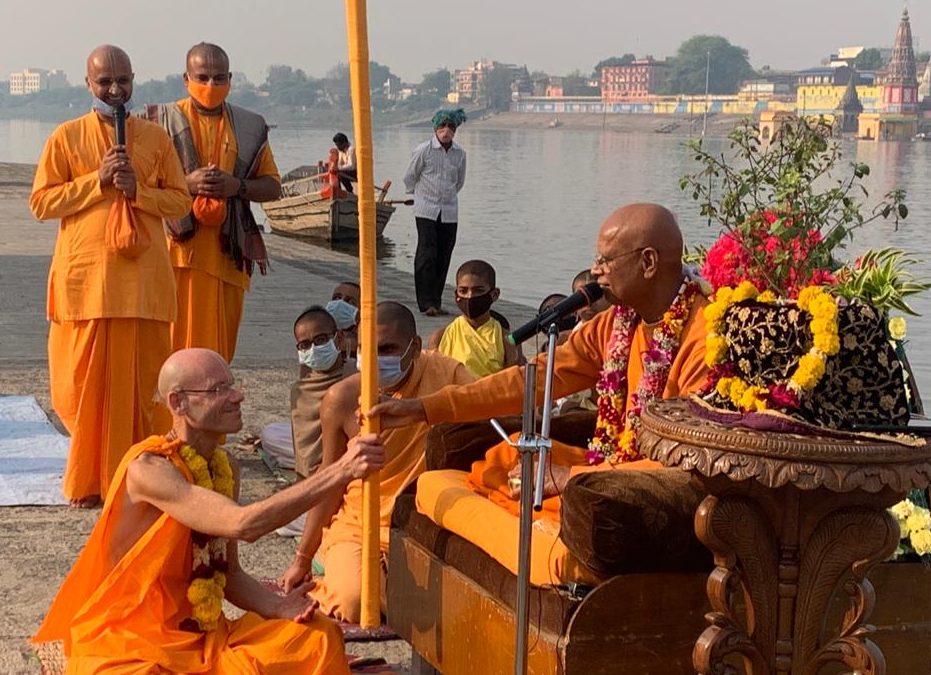 My sannyasa ceremony was completed on Gaura Purnima 28 March during the morning hours, beginning at 6:30 am.  I received the name Sri Krishna Caitanya Swami.  It was a beautiful ceremony on the banks of the Candrabhaga River on our Prabhupada Ghat.  H.H. Lokanath Swami sat on a Vyasasana decorated with roses and other flowers.  Tulsi Maharani was there on a beautiful teakwood table.  Padayatra Maharashtra was there bearing beautiful murthis of Sri Sri Nitai Gaurasundar and Srila Prabhupada.  The Padayatra Bulls were there, along with a cow.

Senior devotees had come from all over Maharashtra including Satcidananda Prabhu from Nagpur, Keshava Prabhu from Pune, Ananta Sesa Prabhu from Amravati, Gaura Krishna Prabhu from Aravade, Krishna Bhakta Prabhu from Solapur, Sahasranam Prabhu from Ichalkaranji,  and many more.  There were around 60 devotees in attendance.  The fire sacrifice was conducted in the Sri Krishna Caitanya Chandrabhaga Temple.

Personally, I have a deep affection for Candrabhaga River.  She is my refuge and shelter.  For many months, the river has been practically dry.  Construction has been going on to make a new bridge and the Government had packed up her water behind an imposing dam.  But two days before Gaura Purnima, her water was released and opulently filled the river bed.  We decided to change the venue to the bank of the River.  Padayatra Maharashtra also miraculously turned up, so Srila Prabhupada and Sri Sri Nitai Gaura Sundar would also witness the ceremony.  I began my Krishna consciousness in ISKCON on Padayatra Europe.  I feel so blessed that my Sannyasa Ceremony was in the association of all these wonderful personalities.

After the Sannyasa Ceremony, I offered gurupuja to Srila Prabhupada.  H.H. Lokanath Swami Maharaja spontaneously had us get in boats and we crossed Chandrabhaga into Pandharpur.  We visited Vaikunthnath Mandir, Sri Sri Sita Ram Laxmi Hanuman Temple, and had a glorious darshan of Sri Sri Vithala Rukmayi.  Again traversing the Chandrabhaga River, we returned to ISKCON Pandharpur and had a dazzling darshan of Sri Sri Radha Pandharinath to conclude the program at 11 am.

I am especially grateful for the overwhelming response and support from the devotee community from around the world.

Here is the youtube video that was live streamed.  We had thousands of attendees online.

It is my duty to beg for guru dakshina for H.H. Lokanath Swami Maharaja.  Please donate here:  https://lok.studio/donation/